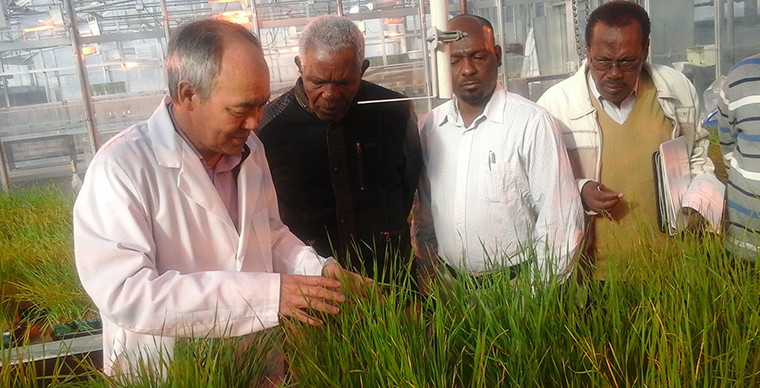 In response to 2013 and 2014 wheat stem rust epidemics in Ethiopia, a new collaborative research and education team formed to study the biology and control of new, dangerous forms of the wheat stem rust pathogen that emerged in East Africa and other parts of the world and to provide Ethiopian scientists and farmers with the tools and knowledge needed to successfully combat wheat stem rust. The Stakman-Borlaug Center plays key efforts in supporting research and capacity-building efforts through organizational efforts, organization of training programs, and execution of communications.

In February of 2015, the SBC organized and hosted the official launch of the Rust Surveillance and Warning component of the project “Seed multiplication and delivery of high-yielding rust-resistant bread and durum wheat varieties to Ethiopian farmers”. This project, funded by the United States Agency for International Development (USAID), includes scientists from the University of Minnesota (UMN), the United States Department of Agriculture (USDA), the Ethiopian Institute of Agriculture (EIAR), and the International Maize and Wheat Improvement Center (CIMMYT). Dr. Matt Rouse, Dr. Yue Jin, and Dr. Les Szabo serve as the project leaders at the University of Minnesota and USDA-ARS and the overall project is led by CIMMYT. Research to date has revealed that the epidemic in Ethiopia was caused by a new race of wheat rust fungus (TKTTF). The project also identified a new resistant cultivar, released for widespread agricultural use by EAIR in 2015.

Developing Resistance to a New Race of Stem Rust

Since the identification of wheat rust pathogen race Ug99 in the late 1990s, breeding of resistant materials has been a priority. ‘Digalu’ incorporated Ug99 resistance and was widely adopted by Ethiopian farmers. The 2013 wheat rust outbreak was particularly destructive because it was caused by an entirely new race of the wheat rust pathogen. This pathogen race decimated the purposely-bred and specifically-selected ‘Digalu’, causing a calamitous loss of up to 90% of the 100,000 hectares planted that year. Importantly, yield losses from wheat rust in Ethiopia can have devastating effects since Ethiopia is the largest wheat producer in Sub-Saharan Africa, producing over 1.6 million hectares of wheat a year.

As an emergency response to the 2013 outbreak, researchers from the USDA-ARS Cereal Disease Lab and the University of Minnesota Department of Plant Pathology, working in tandem with an international team, discovered the underlying cause of the 2013 destruction of Southern Ethiopia’s wheat crop. They discovered that the stem rust epidemic was caused by a new race of wheat stem rust pathogen called TKTTF. Their research concluded that  TKTTF is distinct from Ug99, allowing it to evade particular plant resistance genes effective against Ug99.

Then, in 2014, a second epidemic caused by the same TKTTF race swept through Ethiopia once again. In response, UMN and USDA researchers facilitated the deployment of five new single-race stem rust nurseries in Ethiopia. The purpose of these nurseries is to evaluate wheat lines and identify wheat cultivars and breeding lines that possess resistance to the four most common races of the stem rust pathogen in Ethiopia, including TKTTF. In these trials, ‘Kingbird’ was identified as resistant to all four stem rust pathogen races. In May 2015, project partner Ethiopian Institute of Agricultural Research released the variety for widespread agricultural use.

The Inaugural Meeting of the Rust Surveillance and Warning Project

In February 2015, the SBC organized and hosted the inaugural meeting of the Rust Surveillance and Warning project.  This meeting brought together collaborators from USDA, UMN, EIAR, CIMMYT, Cornell University, and USAID for five days of planning and coordination. The meeting focused on the technical and logistical details of the project.

The SBC was honored to host EIAR Director General Dr. Fentahun Mengistu and Director of the Crop Research Directorate Dr. Asnake Fikre. The meeting was global in reach: Twenty-four people attended this meeting, including participants from Minnesota, Ethiopia, Kenya, Mexico, and Washington, DC. In addition to the intensive planning sessions, the participants delivered seminars to the UMN community, spent time observing rust diseases in the greenhouse, visited a local wheat field where they met with the farmer and UMN extension agents and visited the Mill City Museum in Minneapolis. The SBC also facilitated a series of meetings between Dr. Fentahun Mengistu, Dr. Asnake Fikre, and CFANS administrators, faculty, and staff.